The two most common conditions associated with the brain in myelomeningocele are hydrocephalus and arnold chairi II malformation.

The brain is surrounded by a clear, saltwater-like liquid called cerebrospinal fluid (CSF). CSF protects and nourishes the brain. It flows in a circuit through the brain cavities (ventricles) and over the surface of the brain and spinal cord. It is continuously reabsorbed by the body. Hydrocephalus occurs when there is an obstruction to the flow of CSF, causing fluid to build up within the cavities of the brain. This fluid build-up can cause pressure on the brain tissues and bones of the skull.

Most children (about 85%) with myelomeningocele will have hydrocephalus. Often the collection of fluid does not become severe until after the myelomeningocele has been surgically closed so it may not become evident until the first few days or weeks after your child’s birth.

How is Hydrocephalus Detected and Monitored?

In an infant, the plates of the skull are not yet fused together. The plates are therefore able to shift and accommodate the excess cerebrospinal fluid and thus lessen the impact on the brain. As fluid accumulates, a child’s head circumference increases in size (distance around your child’s head). Hydrocephalus is detected and monitored through regular measurement of your child’s head circumference. Other symptoms such as sleepiness, poor feeding, vomiting, or irritability may also be present. Hydrocephalus can also be detected through scanning of the head. (Ultrasound, CT scan and MRI). 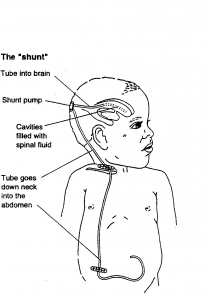 How is Hydrocephalus Treated?

Hydrocephalus is usually treated by insertion of a shunt – this is a device that drains, using a one-way valve, excess CSF from the brain to another part of the body, usually the abdominal cavity (stomach). Draining the excess fluid relieves any symptoms of hydrocephalus that are present. Your neurosurgeon will decide if and when your child needs a shunt.

This commonly occurs following surgical closure of the myelomeningocele, but sometimes it is done before the closure and sometimes on the same day. If a shunt is required, it will always be necessary. A shunt is for life, although a child may need their shunt replaced a few times in their lifetime. Shunts generally work well but problems can arise. Shunts can become infected, blocked or, they can twist and break. The tube from the brain to the abdomen can become too short as the child grows. Surgery may be necessary to remove or replace the shunt or lengthen it as needed.

About 40% of shunts fail in the first year for a variety of reasons. If this happens, CSF will begin to accumulate again. Problems may occur suddenly or develop gradually.

Signs and symptoms will vary with age and from individual to individual. You should seek prompt medical attention if you observe your child experiencing any of the following symptoms:

It is very important for parents and health care workers to be aware of the signs of a shunt problem and to take the child to the doctor or local hospital if they are concerned.

After hydrocephalus, cerebellar and brainstem abnormalities are the next most important part of the Chiari 2 malformation. It is found in almost all children born with Myelomeningocele. 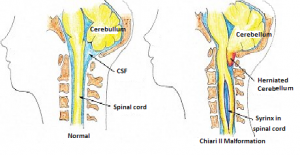 How can Chiari II malformation affect your baby?

Chiari II malformation mainly involves the lower brainstem and lower most portion of the cerebellum, but the layout of the whole brain is also affected. The brainstem contains many of the nerves which control the heart, breathing, blood pressure and help control swallowing, sneezing and coughing. The cerebellum controls the posture and coordination of muscle action to produce precise, coordinated movements.

Your child will have had an MRI to examine the structure of their brain and spinal cord.

When the Chiari II malformation is present, the skull space at the base of the brain is smaller and therefore the brainstem is elongated and displaced downwards into the opening of the base of the skull and top of the spinal canal. The brainstem, cranial nerves and the lower portion of the cerebellum may be stretched or compressed and any of the functions controlled by these areas may be affected.

The malformation might also block the flow of cerebrospinal fluid causing hydrocephalus. Most children with Chiari II malformation have no obvious symptoms and therefore need no treatment  (?? REVISIT AND DISCUSS)

Some children however do develop symptoms (about 5% in our population). You should contact your doctor promptly if your child develops any of these symptoms. Symptoms may be related to faulty shunt function, poorly controlled hydrocephalus or brainstem compression.

Please note: as your child develops, the symptoms may present differently.

We use cookies to optimise your experience, and to enable us to understand how visitors use our website. By clicking ‘SAVE SETTINGS’, you are affirming your consent to the use of cookies as they are configured below. Click ‘More Info’ to learn more about the various purposes that we use cookies for.
More InfoSAVE SETTINGS
Manage Cookies

The purposes for which we use cookies are listed below. You can manage your preference for any purpose that is not strictly necessary to deliver the core website experience.
Necessary Always Enabled

Analytical cookies are used to understand how visitors interact with the website. These cookies help provide information on metrics the number of visitors, bounce rate, traffic source, etc.